Why every update counts 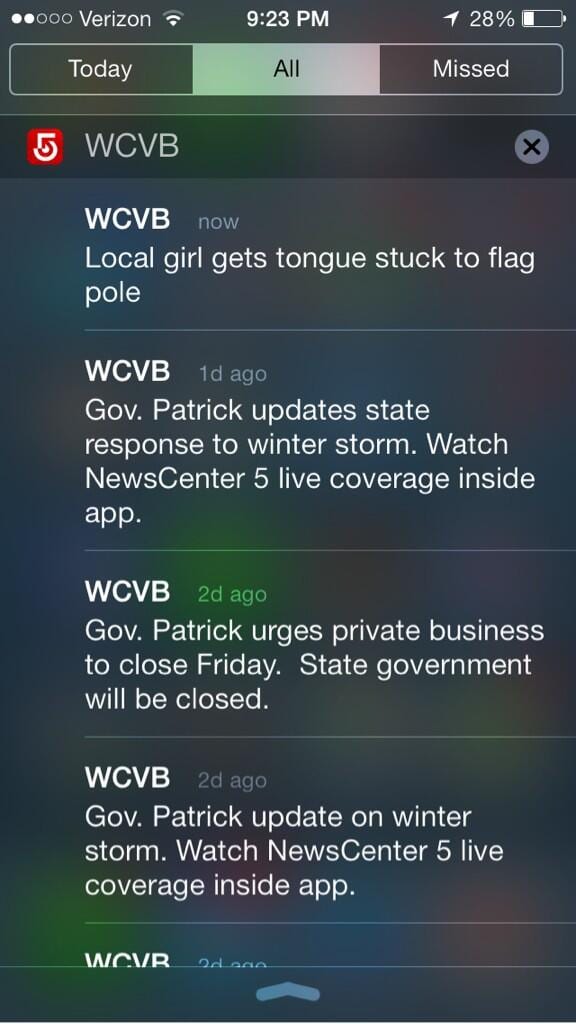 I had to laugh when this photo by reporter Garrett Quinn came through my Twitter feed over the weekend.

As you can see, the WCVB app had sent out a very important update that a local girl had gotten her tongue stuck to a flag pole. Replies to Quinn’s account included more than a few references to the popular holiday movie, A Christmas Story.

A few others pointed out that, however painful and embarrassing this must have been to the child in question, it was probably not “urgent” news.

It wasn’t until later in the day, when a friend retweeted WCVB’s statement – seen below – that I was reminded how easy it is to offend or upset someone.

I was surprised by the apology – what type of response was WCVB receiving that they felt it was necessary to post something that seemed almost as silly as the original update?

Visiting WCVB’s Facebook Page, I was able to get a sense of the issue – those who posted complained the station was taking advantage of the access they had been granted to increase page views and ad revenue. The station’s social media manager blamed a “glitch” with the system, but was immediately called out for having removed an earlier comment from the Facebook Page, while another suggested the app needed an update since “glitches” of this type were regular occourences.

One of the interesting pieces of this story for me, was the difference in response to the update on Twitter and Facebook. Twitter users, generally, seemed to have more fun with the story – “Sure she was triple dog dared…” being one of my favorite replies – while those few Facebook users who commented seemed genuinely upset and offended by the incident.

The tale of the girl with the stuck tongue is also a good reminder how personally people take their information streams – whether sharing alerts through an app to a user’s phone, or sending notices  through your organization’s social channels – it’s important to keep in mind that being provided these open channels is a privilege granted to organizations. And not all content is equally welcome by your audience.