The risks and rewards of re-imaging 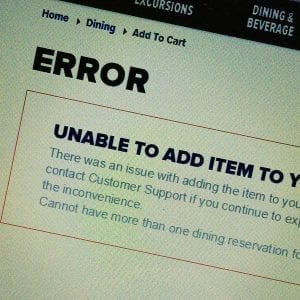 We saw this message a lot.

Booking our cruise on Royal Caribbean’s Quantum of the Seas, we looked forward to checking out many of the features of the cruise line’s newest ship including an indoor, multi-use gymnasium, skydiving at sea, and “Dynamic Dining.”

For those not familiar, most cruise ships have a main dining room at which guests eat most of their evening meals at a set time. With Dynamic Dining, Royal Caribbean has replaced the main dining room with over 18 restaurants, including ten at which guests can make reservations for the day and time that works best for their plans. The assumption is the new dining model was created as a way to appeal to a younger, non-cruising audience.

Unfortunately, the promise of flexibility and “a new world of culinary exploration” was immediately destroyed during the process of trying to make reservations. After spending many hours trying to book meals through the Royal Caribbean website, my husband began to describe the vacation as “the worst ever” – months before we even stepped onto the boat.

The website was slow, buggy, and regularly timed out or failed completely. Working with the Royal Caribbean team over the phone also proved to be frustrating and slow, with one meal reservation taking 45 minutes, as I believe they were suffering from the same website issues. And customer service, specifically through Twitter, was non-existent. (Their Twitter account was brutally cheerful at a time when we were feeling less than happy). 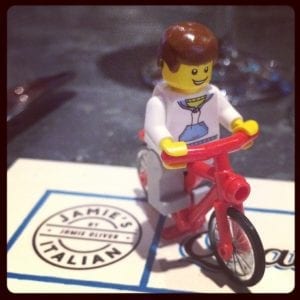 Having watched him on television, we were excited to try Jamie Oliver’s food while onboard.

Going into the cruise with very low expectations, except that perhaps we’d be at the buffet every night due to lost reservations, we found the Dynamic Dining experience to be a refreshing change from the traditional dining room.

We liked the opportunity to pick and choose from various restaurants, and were able to eat in several of the restaurants we had been unable to reserve on dry land.

Connecting with other cruisers, we agreed the difficulties we had before the cruise had colored our experience before we even got on board,  and forced Royal Caribbean to “catch up” during the cruise.

Reflecting back, it occurs to me that Royal Caribbean was doomed to receive some negative feedback on their re-imagined dining model because, ultimately, the people that cruise today weren’t looking for a change. Or put another way, current cruisers like (or don’t mind) the main dining room.

Does that mean they shouldn’t have made the change? Absolutely not.

But they could have protected themselves, and their customer service team, by ensuring that the systems in place worked better so that even those travelers who may be open to this new option, wouldn’t consider it a negative.

Ultimately, I believe that by making compromises for traditionalists, such as introducing a “classic”option, as well as working out the kinks in the system before expanding the model, will leave Royal Caribbean better positioned for the future.

And that, of course, is the reward of re-imagining.