Leadership lessons from getting lost

Did you know it’s possible to get lost on the Riverwalk in San Antonio? I made this discovery last Friday during an early morning run before speaking at the Texas Bankers Association’s Emerging Leaders Conference.

As I made my way back to the hotel, I found myself thinking about the leadership lessons I could learn from getting lost – clearly I was influenced by hanging out with the leaders. 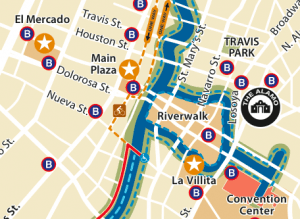 Where I thought I was running.

Be prepared
Having left my TuneBand at home, I decided to leave my phone in the room, and instead use my GPS watch to track my workout (because what is the point of exercising if I can’t collect the data?).

Little did I know how much I would regret this decision.

Recognize you are off track
Confident I knew where I was going, I cruised along the Riverwalk, focused on my pace and my pains. I should have been focused on my surroundings, which had changed from familiar shops and restaurants to unfamiliar greenery and construction.

Don’t be afraid to stop, or turn around
My first instinct was to keep pushing on, but I soon recognized that I was digging myself deeper into the hole. Instead, I stopped, thought about my options and turned around. Given the data available, backtracking was my best, albeit most frustrating, option.

Look before you leap
With stairs leading up to the street, I was tempted to jump off the Riverwalk. But each time I popped up to street level, I realized that I was likely to become more lost, compounding the problem.

Ask for help
No one likes to admit they’ve made a mistake – especially those of us in leadership positions. While there were maps displayed on the Riverwalk, they were poorly lit, so I asked for directions from a police officer.

Don’t panic – Make a new plan
I had planned to take a short run, shower, pack and eat before the first session – in a panic that I wasn’t going to have time to properly prepare for my presentation, I took a few deep breaths, and came up with a new plan. Having found my bearings, I knew I could maintain a comfortable pace back to the hotel and still have time to do everything, arriving a few minutes late to the first session.

Learn from your mistakes
Back in my room, I took the time to look at the map (better late than never), to figure out where I went wrong. Did you know the Riverwalk is over 14 miles long!

I also recognized that next time I ran in an unfamiliar place I need to get a lay of the land, have a plan, and remember my phone.

Find the bright side
It’s easy to focus on the things that went wrong – rather than to find the positives. I got a great workout (greater than I had planned), saw the beautiful natural surroundings of the Riverwalk, and made it back on time. (I also found something to write about for the blog.)

I’m learning that becoming a strong, effective leader is an ongoing process – but the lessons are everywhere.