Getting over my fear of speaking in public 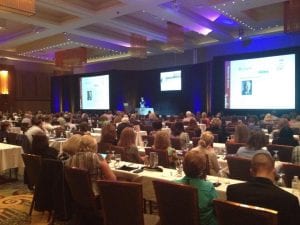 That’s me – Speaking at the COCC Client Conference.

For the second year I had the privilege of addressing the seniors of the New England School for Financial Studies on the topic of Executive Presentation skills. Preparing for the class, I was not surprised to learn that as many as 75% of people have “glossophobia” – but what I didn’t realize was that many fear it more than death.

Maybe it’s because death is unavoidable.

At the end of the class, one of the students asked if I had ever had trouble speaking in public. Given the reactions, I think people were surprised to learn that I suffered from stage fright throughout my school career. And can I just say – it sucks.

(I know, I know. I’m not supposed to use the word “sucks,” but sometimes it’s just the correct description for a situation.)

In my case, the situation was particularly painful and frustrating because I wanted to perform – I loved singing and liked the idea of being on stage. But when the performance or solo actually arrived, I suffered from a severe case of performance-related anxiety. I would get sweaty and flushed, and my voice would at minimum waver, and in the most extreme situations crack or fail me completely.

It was awful. And yet I kept putting myself in situations where I had to face my fear, and where I often failed.

After college, marriage, and kids, I once again stepped onto a stage – this time not to sing a song, but instead to give my first (of what would turn out to be many) presentations about social media. Leading up to the presentation, given at a New England Financial Marketing Association conference, I cursed myself for doing it again – putting myself in a position to fail.

But then a funny thing happened. . . my voice didn’t fail me.

Whatever the reason, each time I said yes to speaking in public I shook off a little more of that old stage fright, and found my voice. That’s not to say that I didn’t still have performance issues – I talk to fast, I move around too much, I can blurt out inappropriate comments because my tongue is moving faster than my brain – but my voice has remained strong.

And I can happily say that I not only do not fear public speaking, but I’ve come to enjoy it. I’m also able to rock the mic at karaoke.