What riding my bike inside taught me about gamifying banking

I would describe riding on my bike trainer during the winter in the same way my friend, and many others, would describe banking and financial planning – boring but necessary.

While stuck at home during our most recent “bombogenesis” (my new favorite word), my husband encouraged me to try Zwift, an exercise game that allows you to ride and race with real riders from around the world in a virtual environment. I had been reluctant to give Zwift a try both because I didn’t want to spend the money, and I didn’t really understand how the program would inspire me to get off the couch and onto the bike.

During my first ride, I immediately realized that I had it wrong. And that I was looking at one of the best examples of how gamification – “the application of typical elements of game playing (e.g., point scoring, competition with others, rules of play) to other areas of activity ” – could help change behavior.

Which also got me thinking about another question that has been kicking around the industry – can banking be gamified?

There have been attempts to “gamify” certain banking behaviors, but let’s face it – most of the efforts have been lame. As I suffered on my bike, I found myself considering what makes Zwift work, and how it might be applied to banking using the online & mobile banking environment:

Personification
Setting up your rider is an important first step when starting an account. Settings for skin and hair, as well as bike and kit colors, allow you to create your rider in the virtual world – you can create a realistic avatar, or something totally different. In my case, I found something thrilling about riding without a helmet! 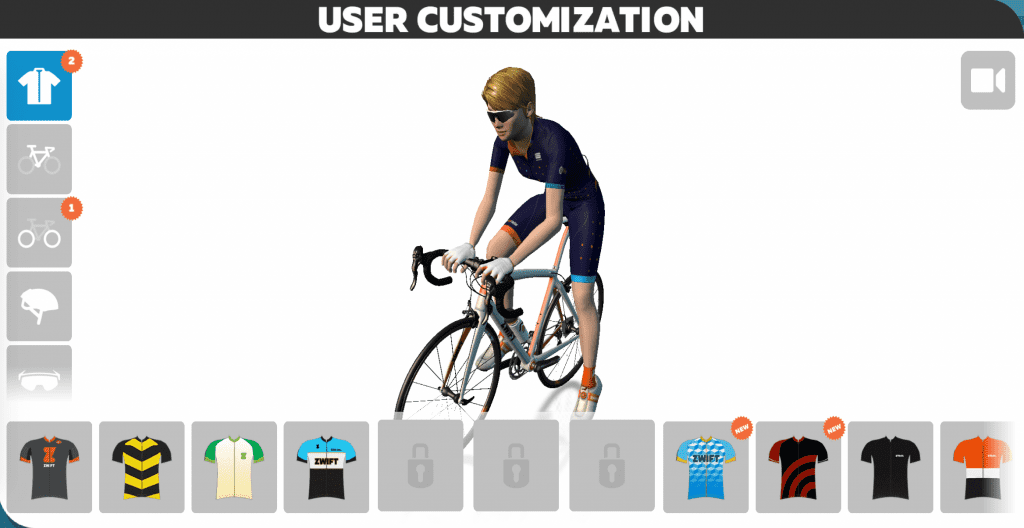 Yes, I found a bike kit in blue and orange, my husband’s shop colors.

Setting the stage for gamification of banking – financial institutions could allow customers to create an avatar within Online Banking that could be used to represent the individual within any online communications, but also act as their representative for further gamification.

Achievements & Bonuses
Like a video game, you start at level 1 and with each mile ridden earn points which allow you to “level up” and unlock new virtual prizes including kits (uniforms), color options, etc., in addition to the prizes unlocked through completion of certain achievements including speed, time drafting, miles ridden etc. Some achievements award points, pushing you to the next level, while others unlock virtual prizes, which can be used to customize your avatar.

Virtual “things” in exchange for real effort (or money), may seem ridiculous, until you see the “Tron” bike. 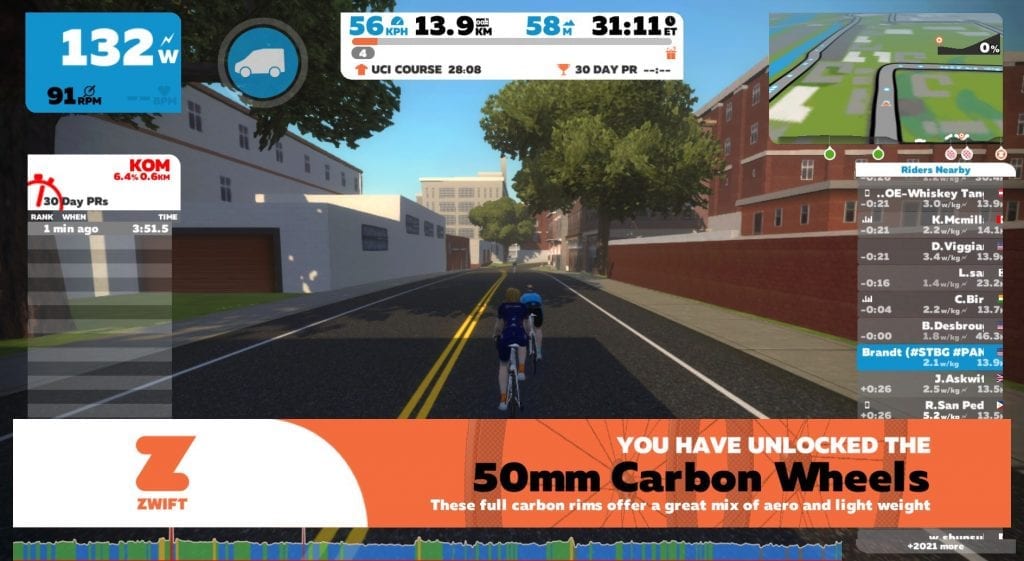 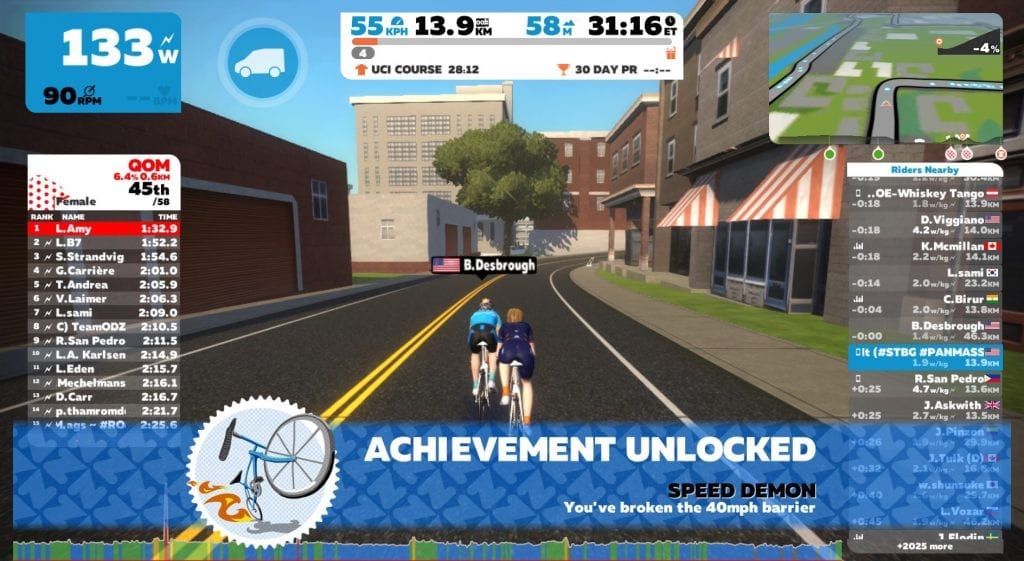 Adding points with each achievement.

Financial institutions have no end of potential achievements for which members and customers could be rewarded, from the use of banking services (debit card usage, estatement sign up, mobile banking usage, online bills paid, etc.) to financial behaviors and habits (e.g. savings levels achieved, deposits made, accounts added). Rewards could take the form of real-world prizes such as monetary bonuses or bank-themed swag, or virtual prizes including clothing and other customizations which could be worn by the customer’s avatar.

Goal Setting, Tracking & Training
My goal is to ride 3 hours per week – including weekends – which the game tracks. Users looking for additional motivation, or guidance towards reaching their training goals, can select from various workouts provided by Zwift. All of these activites help push users towards the next achievement by inspiring them to ride and engage with the application.

Allowing customers to set savings goals which can be viewed, tracked, and rewarded would be one way to gamify banking. Providing financial educational videos within the system which users could watch as a way to score points or unlock benefits, would be another way to engage with content that would otherwise be considered, you guessed it, boring but necessary.

Competition
One of the motivating elements of Zwift which differentiates it from other training systems I’ve used is the competition. It’s often hard to know how you are doing while riding miles and going nowhere, but within the virtual environment, your efforts on the bike translate to movement on the road. For those of us with a competitive streak, there is nothing more motivating than attempting to catch the wheel of, and then pass, another rider. 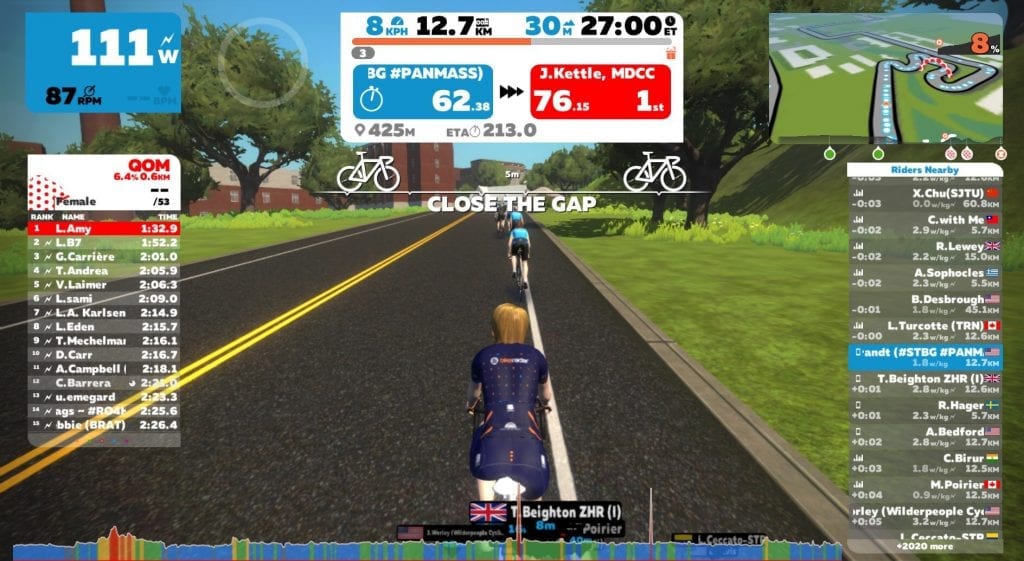 On screen prompts encourage me to “close the gap” and catch another rider.

On a global level, financial institutions should be able to show comparison data without revealing information about specific customers. For example, how do users compare to other customers in the bank – are they saving more or less? Are they borrowing more or less? By encouraging customers to share information – age, income, family status, other banking relationships or deposits at other institutions – additional comparisons could be made based on this additional data.

Community & Conversation
Part social network, Zwift gives you the ability to connect with friends and fellow riders from the “real world,” and receive notification when they are “Zwifting,” which can give you a case of FOMO if you are stuck working at the office. You can also receive encouragement through a mechanism whereby riders can give you a “ride on!”

In addition to connecting IRL friends, users can meet new riders through group events. Joining a women’s recovery ride, I was struck by the image of nearly 100 women on bikes – a sight that I have never witnessed outside of a race and which left me breathless. During the ride, I participated in text conversations on a range of topics including pregnancy, training, equipment and how to avoid falling off the trainer while texting (apparently the answer is to use text to speech). 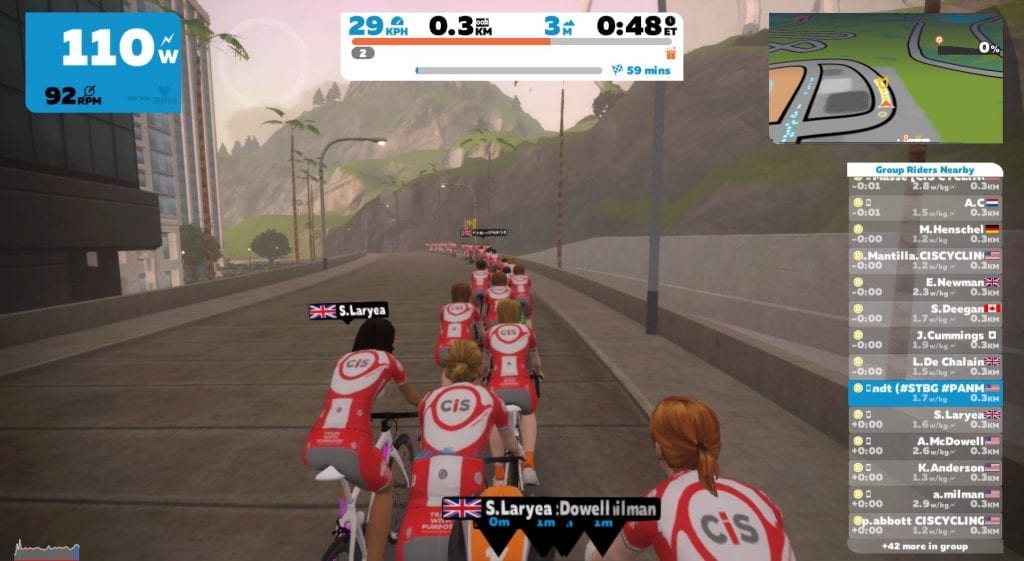 Riding with so many women was amazing. 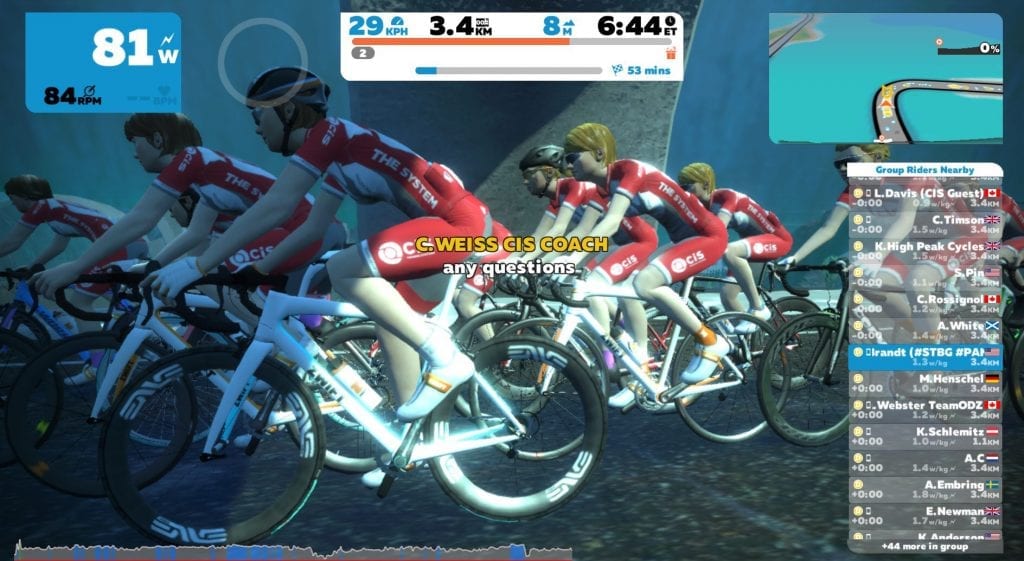 Engaging with the ride leader.

This is where gamification can get a bit tricky for financial institutions, particularly as it relates to privacy and security. But opening the opportunity for customers and members to connect with others, perhaps using aliases, would allow users to have conversations with groups of like-minded users – homeowners, savers, millennials, business owners – and would give financial institutions insight into the comments and concerns of their customers and members.

For community banks and credit unions there is also an opportunity to connect customers to a larger community through their selected online banking provider. Imagine, for example, if Fiserv or COCC created a gamified online banking app which would allow customers and members to connect, compete and communicate with users across their member banks and credit unions. Users would then be able to see how their savings and spending habits compare not just to people at their institution, but across the country.

Sharing
At the end of each ride, my activity is posted within the program, and I have the option to share to Strava, a social network for athletes (and another great example of gamification, community and competition). 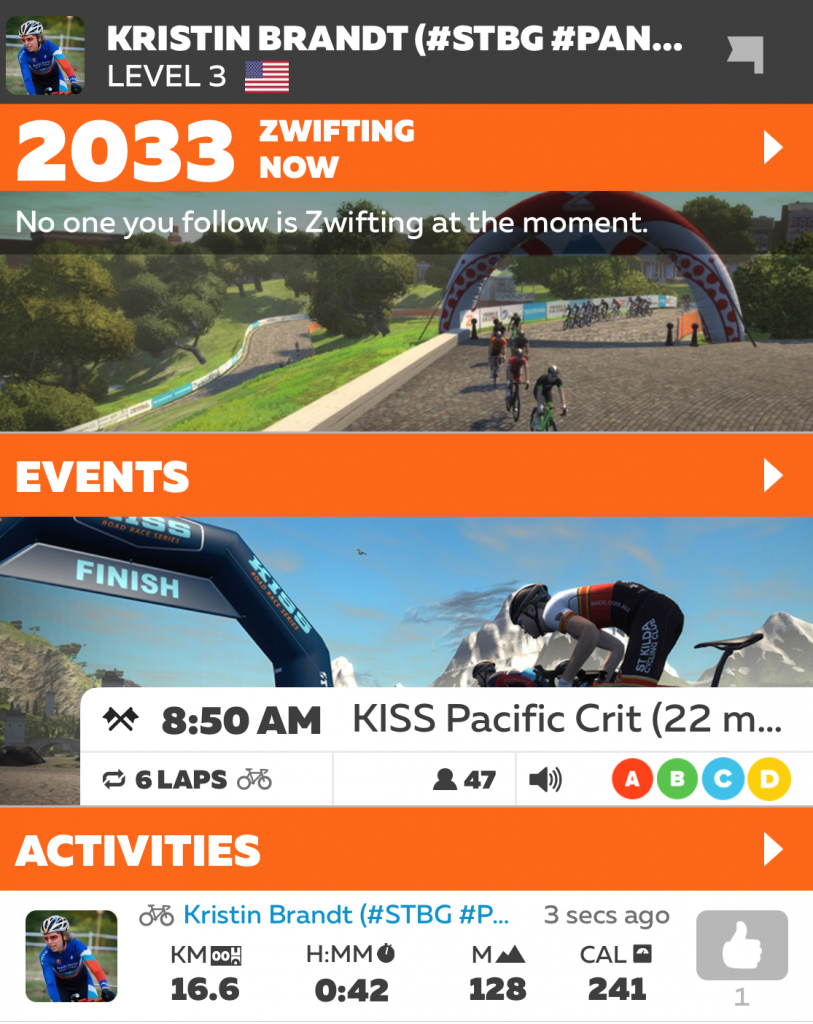 Again, sharing financial and personal information is challenging for institutions, but not without precedent. Consider the new personal payment app Venmo, within which users share limited payment activity including who they paid, and for what they paid.

Allowing users to share achievements or limited activities would both validate their activities – as the saying goes, “if it’s not on Strava it didn’t happen,” but also potentially drive new customers looking for a personalized, interactive banking experience.

Game on?
Blame it on the adrenaline, or the lack of fresh air in my mom cave, but as I rode with ideas of banking and games in my head, I found myself filled with excitement at the opportunities.

Now I can only hope someone steps up to let the games begin.